1. Healthy is More than Just A Trend Here… 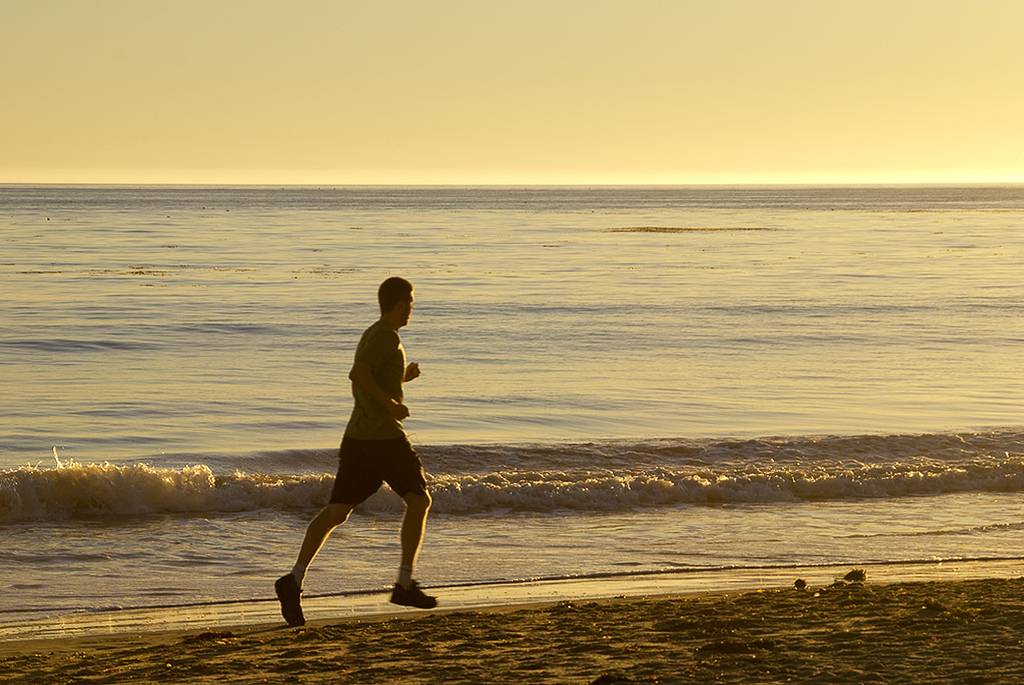 … it’s a lifestyle. Santa Barbarans probably run more, hike more and eat more veggies than everyone in your last city. They’re also getting more Vitamin D, since it’s sunny over 300 days of the year. You’ll find crowds soaking up the sun and working out at East Beach, where everyone who’s anyone can be found on a run, beach volleyball court or stand-up paddleboard.

2. Our Surf’s Out for Summer 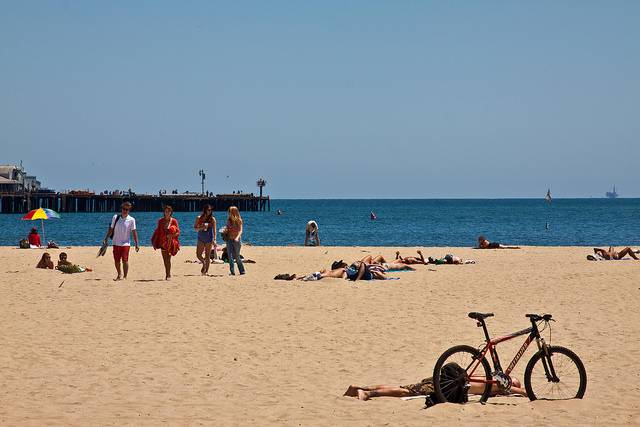 Long stretches of pristine beaches cozying up to Rincon, one of California‘s premier surf spots, doesn’t necessarily mean your dreams of barrels during dawn patrol will come true. Surfers here are your average sunbathers and shaka-throwers in summer when the waves are nonexistent.

3. We’re the Source Of Holy Guacamole 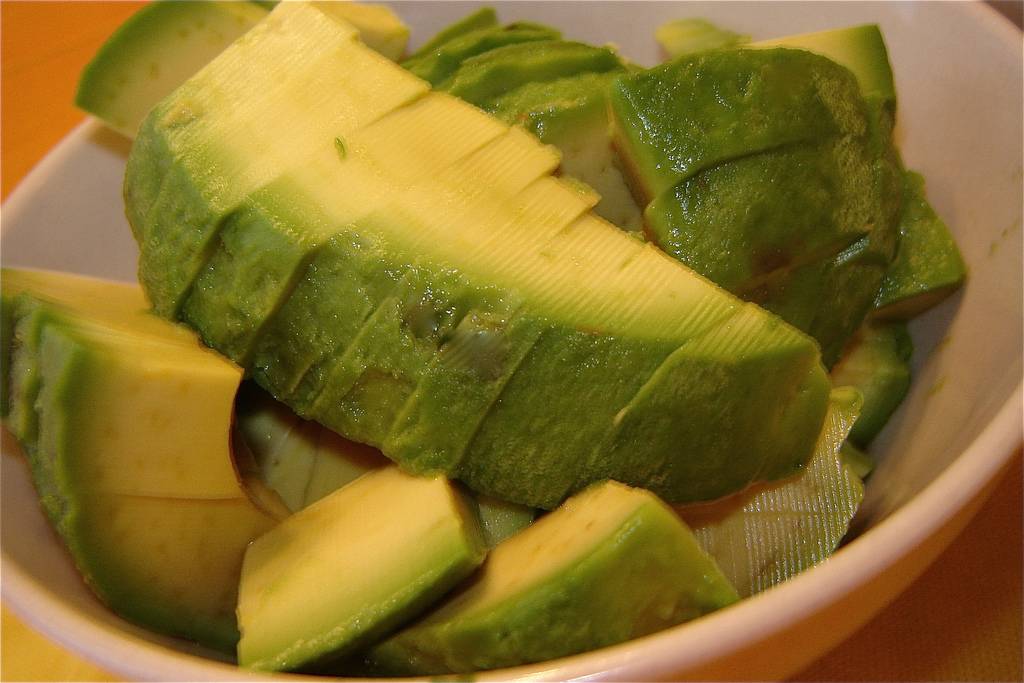 In 1871, Santa Barbara’s own Judge R.B. Ord introduced Mexican avocado trees to the U.S., bringing the joy of healthy fats and guacamole to all. Our burritos and our palates are forever grateful, Mr. Ord. 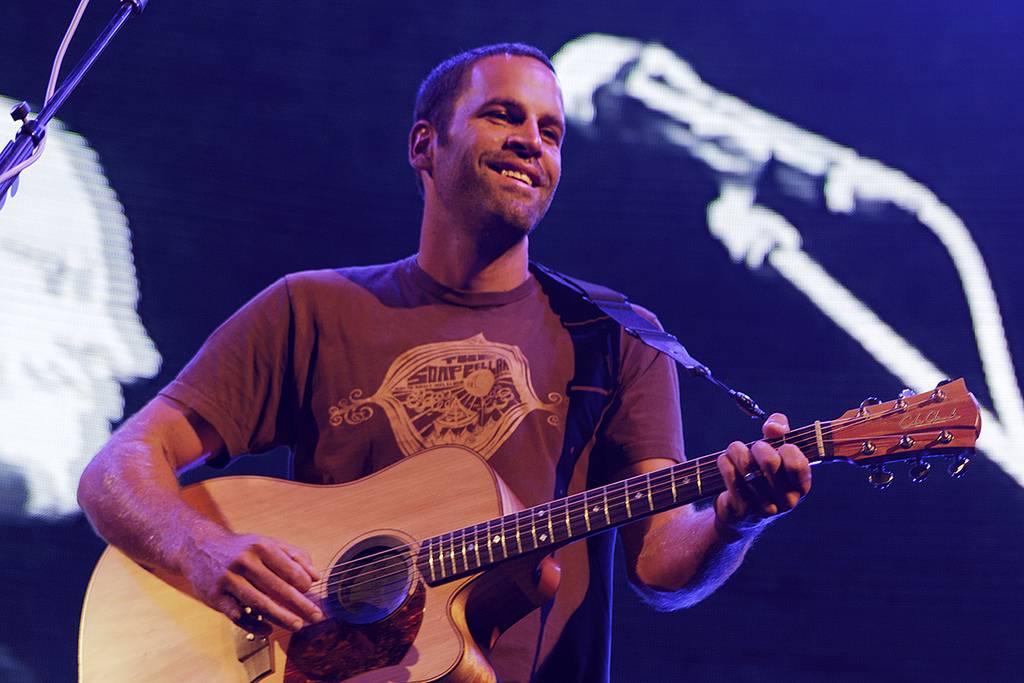 He’s a charming, ultra-chill surf and song guru with billions of dollars in album sales and a cult following across all seven continents. But before he was a world-famous musician, Johnson was a humble UCSB student eating at the DLG—obviously on a day when there was no Broccoli Surprise, or the campus cafeteria never would have made it into a song lyric. 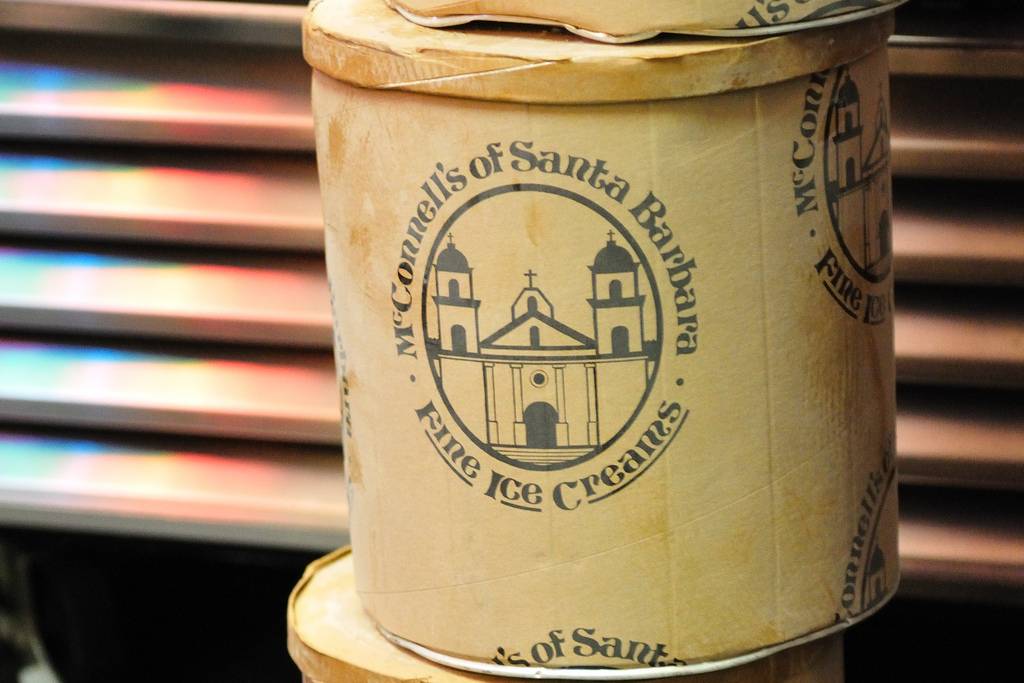 Or at least not at McConnell’s Ice Cream. As a true ice cream aficionado, I can confidently say having McConnell’s at your fingertips is worth the price of real estate in Santa Barbara. Arguably America’s best ice cream, it’s superb as a sandwich, sundae, scoop or my favorite—breakfast. 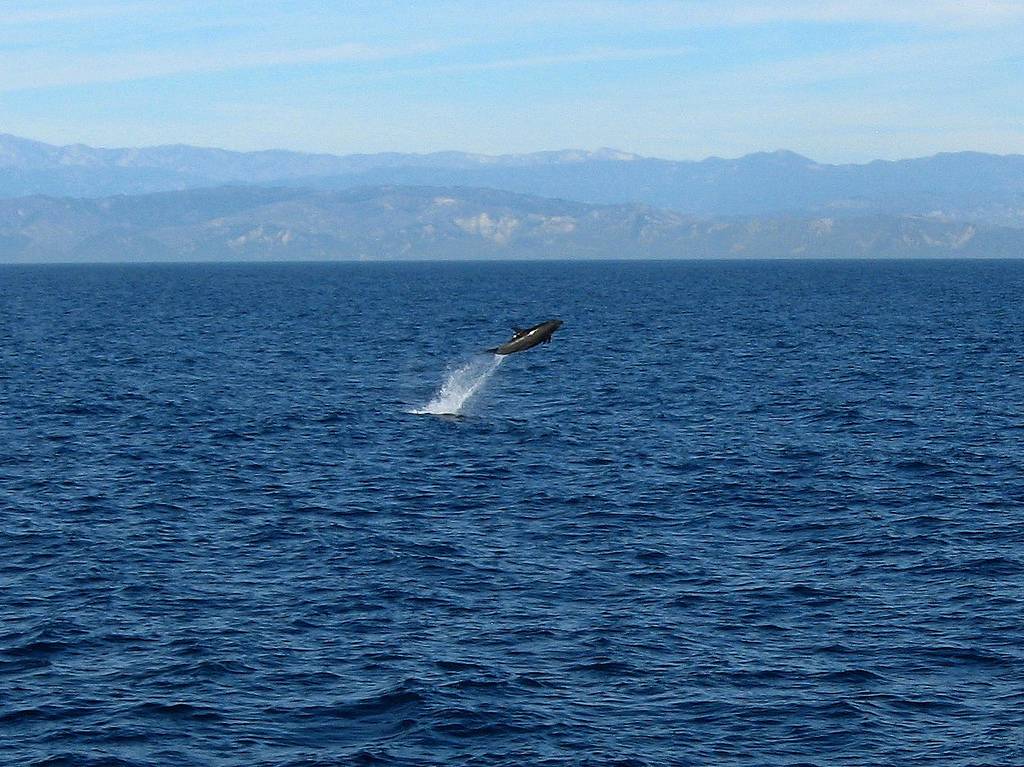 Just off the Santa Barbara coastline, you’ll find The Channel Islands National Park. Each of the five islands are bursting with mind-blowing ecological diversity, both aboveground and under the sea. The protected waters offer some of the best diving in California, plus an unparalleled opportunity to spot sunbathing sea lions, pods of dolphins and migrating whales. 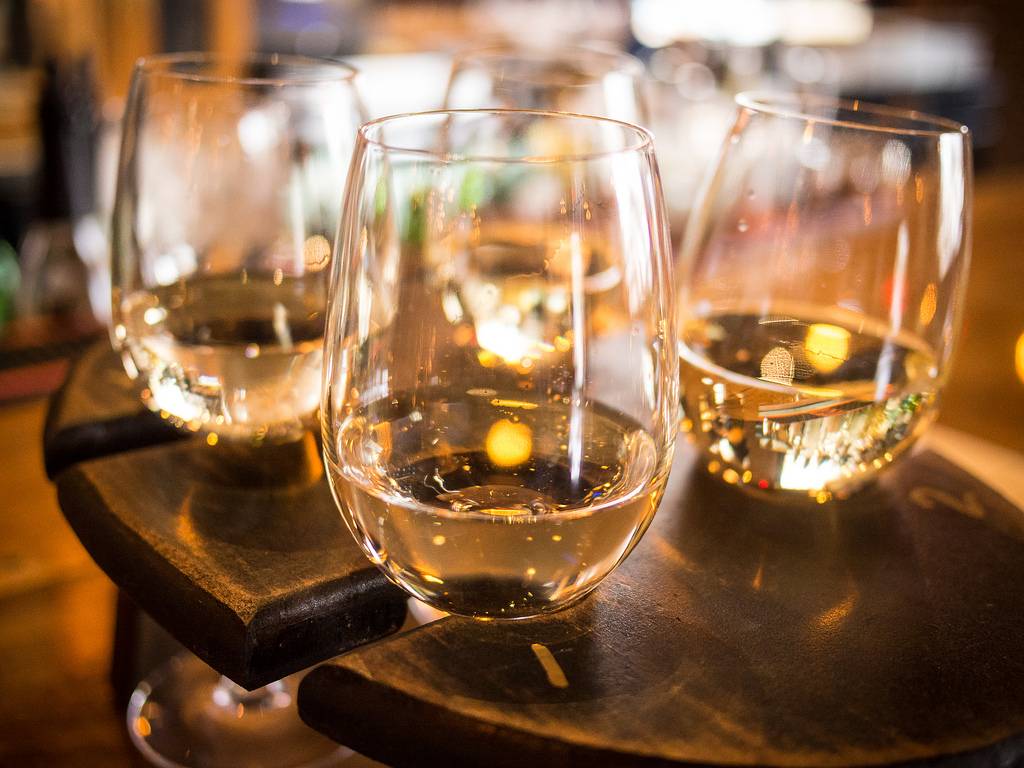 We won’t make Napa admit it, but Santa Barbara County produces some of California’s favorite wines. As a result, downtown has a booming collection of wineries and tasting rooms within walking distance. When there’s no need to hire a driver, any day is a good day to hike the Urban Wine Trail. 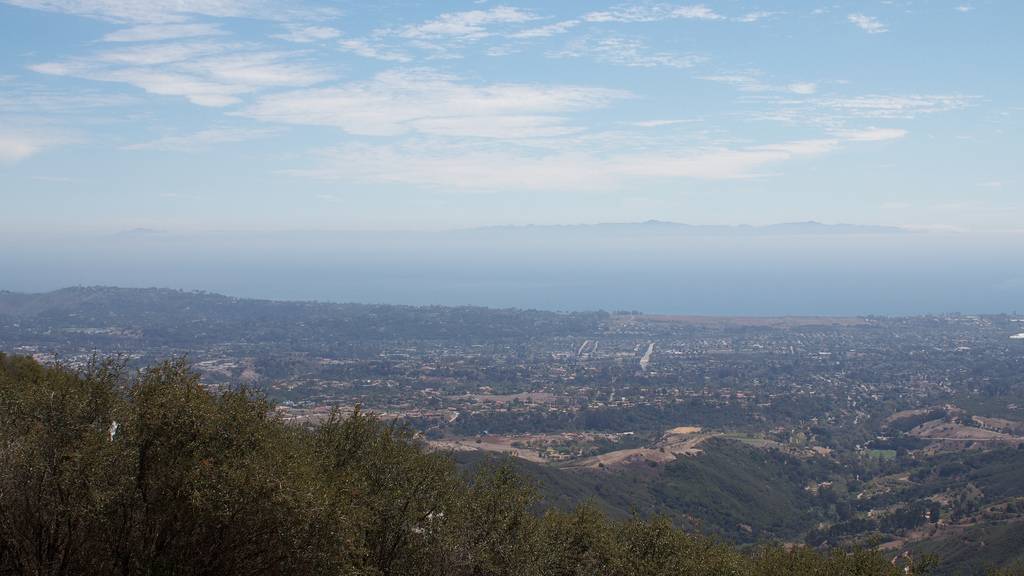 Wedged between the Pacific and the Santa Ynez Mountains, the best way to view Santa Barbara is from the top. Downtown’s Spanish style architecture, palm tree lined boulevards and the distant Channel Islands are quite the reward for a little afternoon sweat.

9. You Can Get Educated At The World’s Most Beautiful Community College 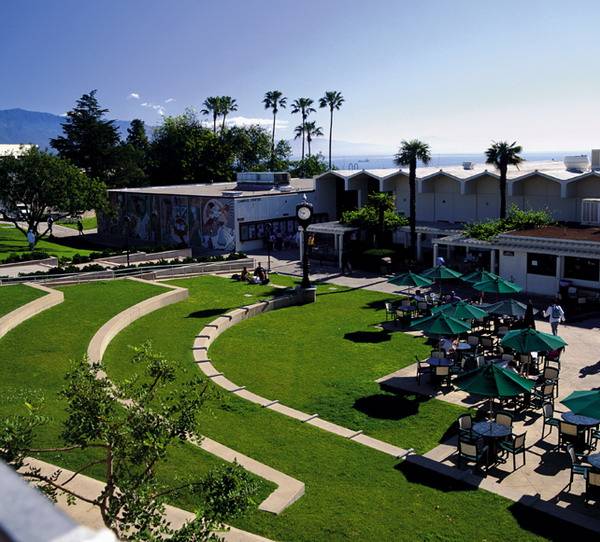 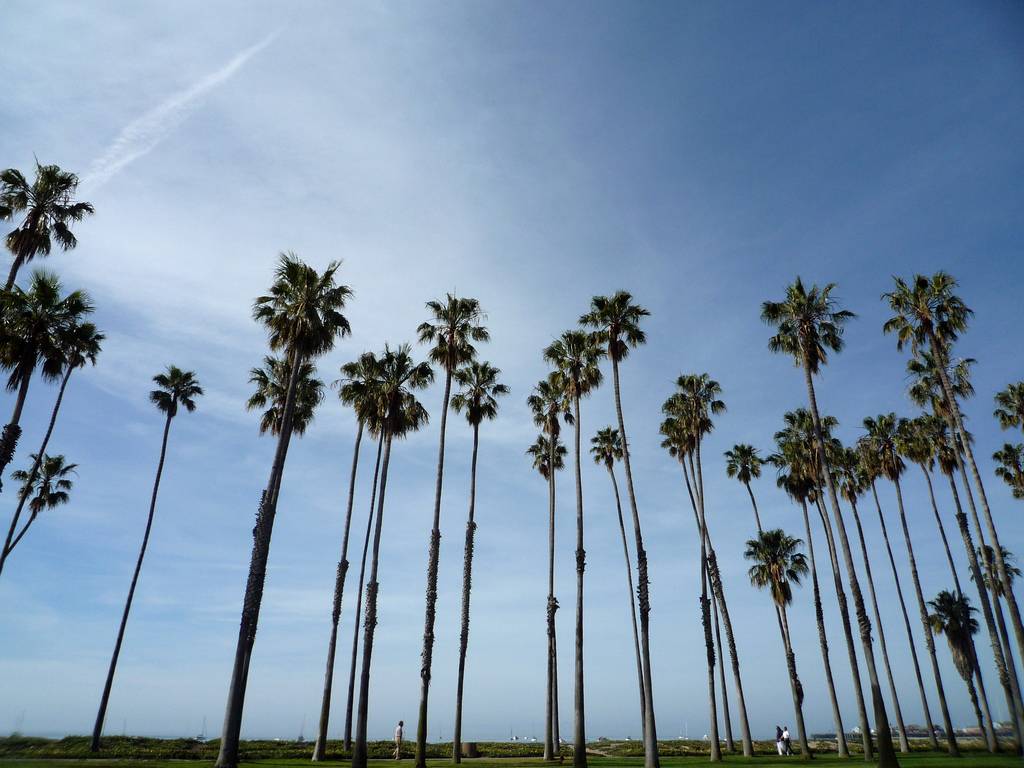 A Mediterranean climate and picturesque coastline earned Santa Barbara the nickname of “The American Riviera.” Our condolences to your travel agent, but there’s no need for flights when the city is already brimming with red-tiled rooftops, high-end restaurants and charming boutiques. 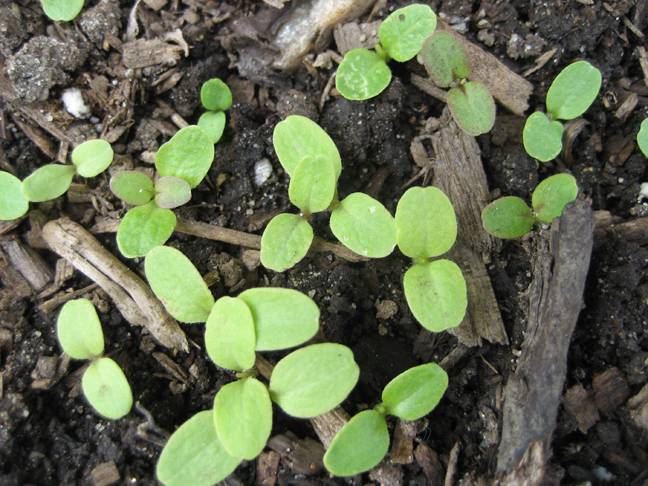 After the catastrophic Santa Barbara Oil Spill in 1969, the city had environmental preservation heavy on its mind. The result? The very first Earth Day back in 1970. We’ve been ardently celebrating Earth Day ever since, with festivals so elaborate there’s even valet bike parking. How green is that?

12. You Can Party with Confetti Eggs 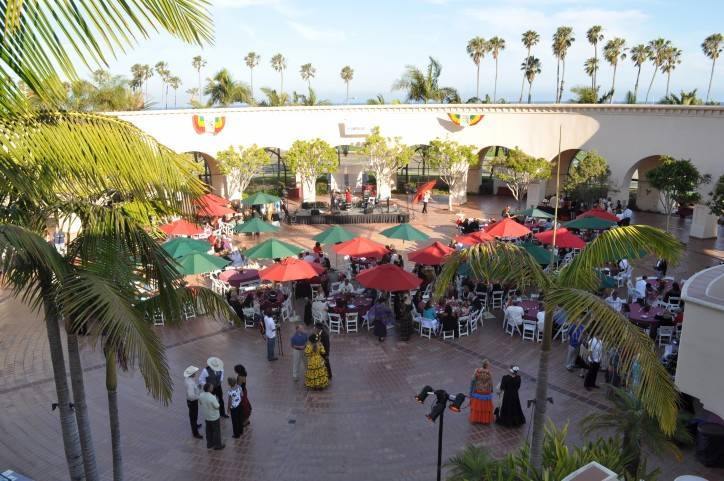 When the Spanish settled Santa Barbara, they left behind two pieces of history—the Santa Barbara Mission and an affinity for fiestas. Every year, Old Spanish Days takes over downtown with a citywide fiesta of music, food and confetti-filled eggs for cracking on your friend’s noggin. 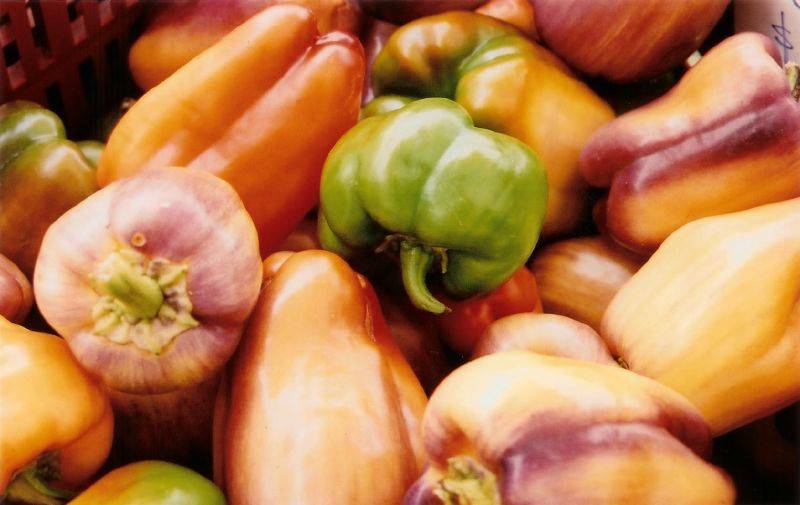 On Tuesday nights, Santa Barbara’s famous State Street turns into an iconic California farmer’s market. Traffic shuts down to make way for peaches and avocados, while dreadlocked musicians in tie-dyed cotton pants offer songs and smiles as you fill your basket with organic kale.

14. We Have A True Monarchy 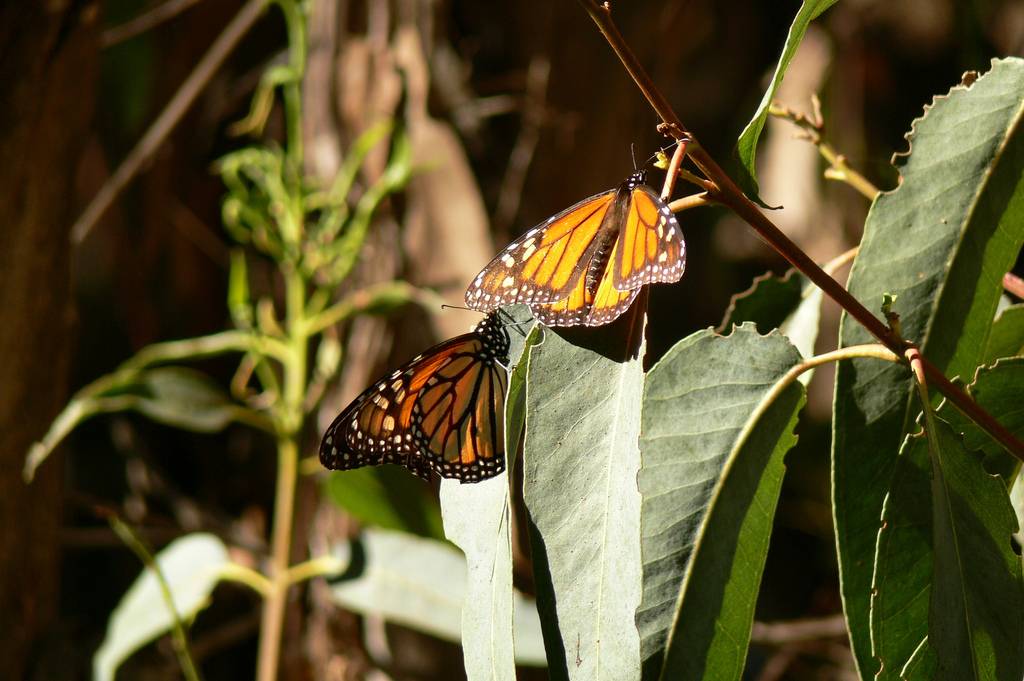 Santa Barbara’s monarchs sit on a throne of trees. The Coronado Butterfly Preserve is one of California’s largest monarch butterfly winter roosting locations, and its cliffside, oceanfront location definitely isn’t the worst spot for a winter vacation. 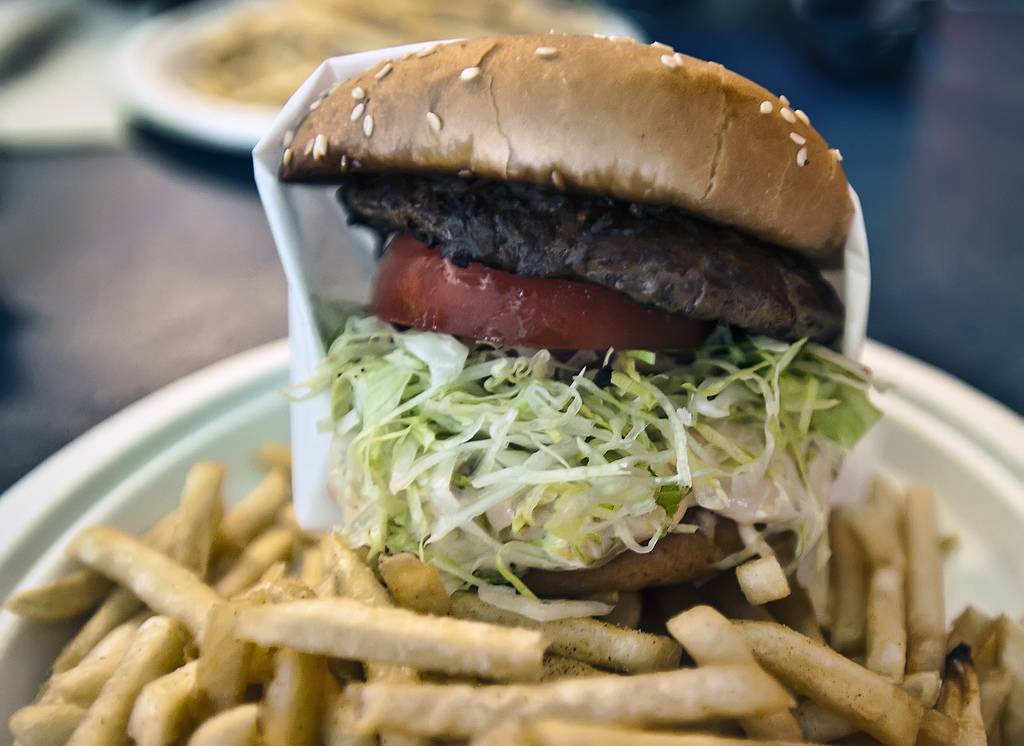 The world famous Jalama Beach Grill’s beachside burgers are an SB County classic, especially since every order comes with a side of gorgeous, secluded beach. There’s surf and camping, and come on, “Jalama” (ha-la-ma) is just plain fun to say.

16. Some Of The Best Things In Life Aren’t Free 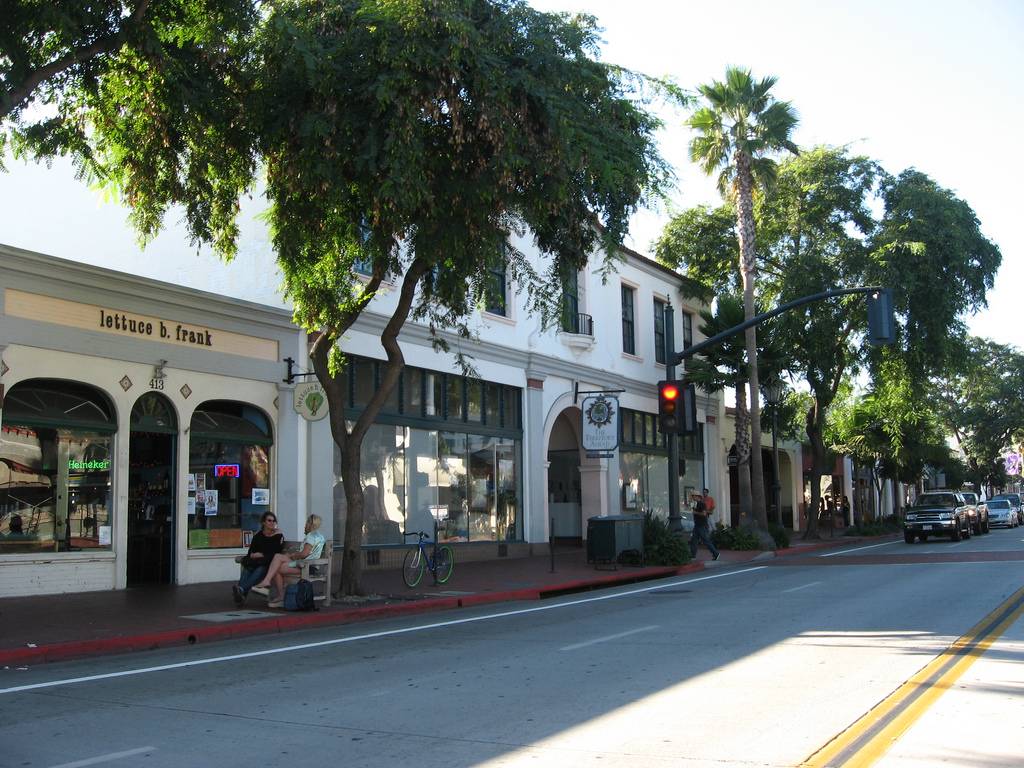 Yeah, Santa Barbara is a wealth of natural beauty and priceless adventure, but there’s no substitute for some old fashioned retail therapy. The bloodline of downtown, State Street, is a consumer paradise that runs straight up to Stearns Wharf and the Santa Barbara Harbor. Teeming with local small businesses like Plum Goods, selling organic, recycled and fair trade goodies, along with the big names you know and love like Macy’s or Nordstrom, there’s truly something for everyone.

17. You Can Dine with Julia Child’s Ghost 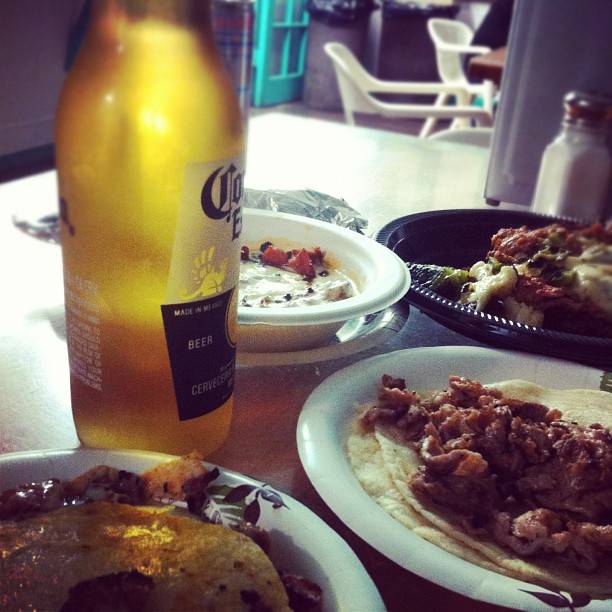 The famed culinary demigod Julia Child claimed the suspiciously modest La Super Rica Taqueria as the home of Santa Barbara’s best Mexican food. With handmade tortillas soft enough to swaddle a newborn and an incessant mile long line, this taco haven seems to have earned her blessings for good reason. 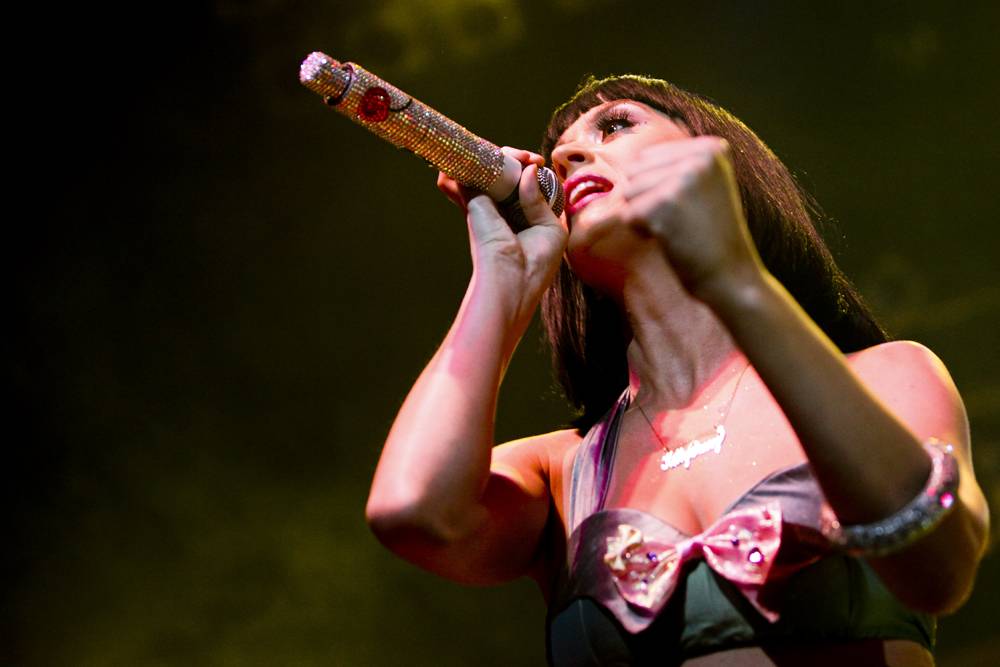 Contrary to popular belief, pop superstar Katy Perry was born and raised in Santa Barbara, not Candyland. She attended Dos Pueblos High School, where there are no records of her wearing peppermint bras or neon wigs. 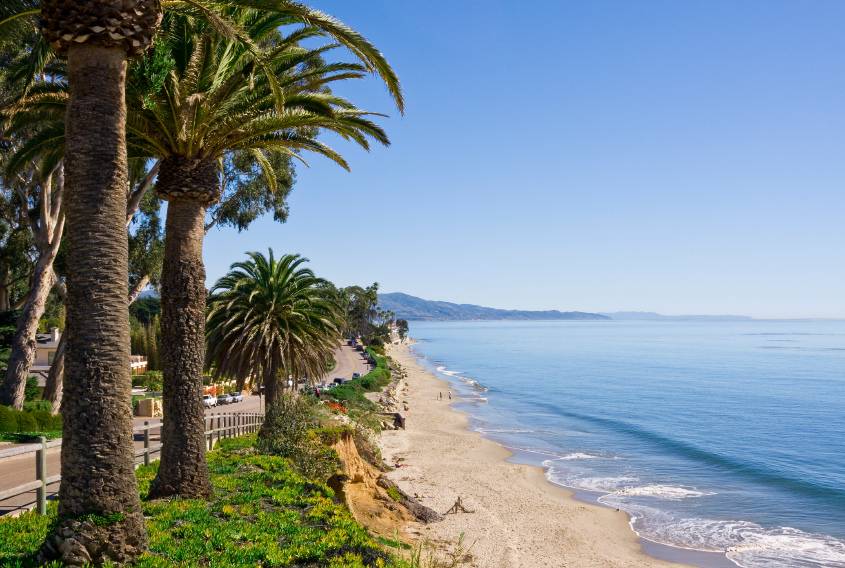 Directly across from the exceedingly luxurious Four Seasons Biltmore, Butterfly Beach is where celebrities go to get spotted for a “Who’s Hot” bikini bod spread in People magazine. Everything on this beach is beautiful, from the beach bunnies to the views. 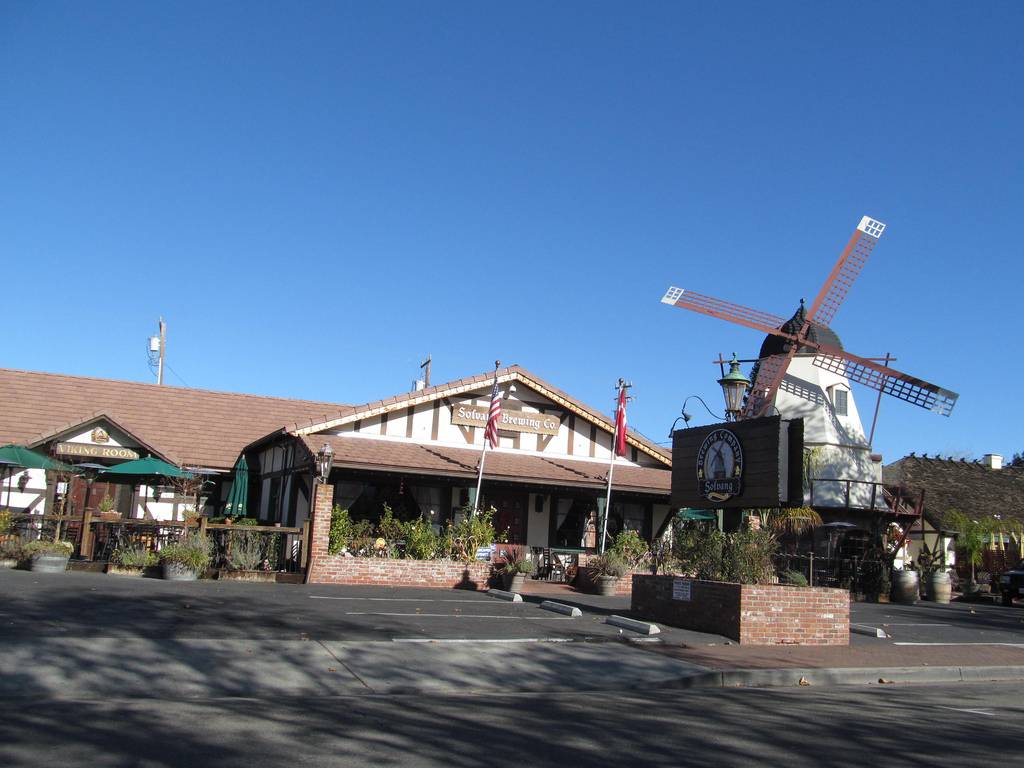 On the edge of Santa Barbara County sits Solvang, America’s Danish Capital. Founded in 1911 by a homesick clan of Danes, the village looks like the inside of a little girl’s dollhouse. There’s no better place (besides Denmark) to gobble down traditional aebleskivers and contemplate windmills. 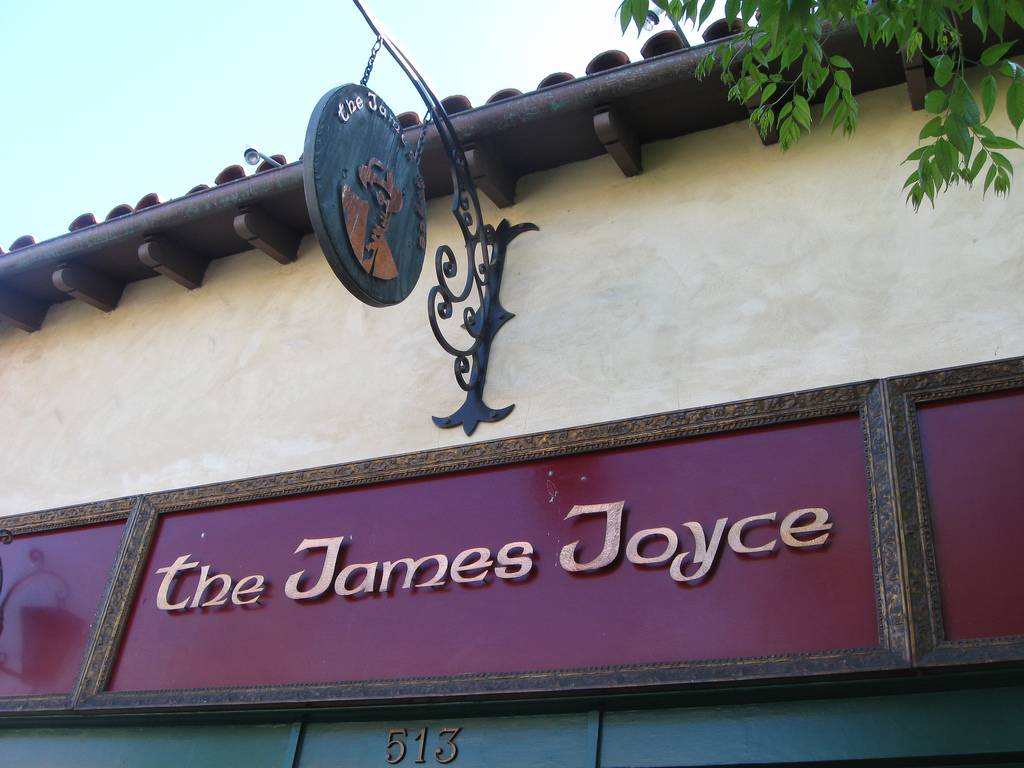 The James Joyce is the city’s first Irish bar, and one of the least pretentious spots for a good drink. There’s toe-tapping live music six days a week, the occasional Irish immigrant and an energetic following of long-time Guinness lovers.

22. This Is Chumash Territory 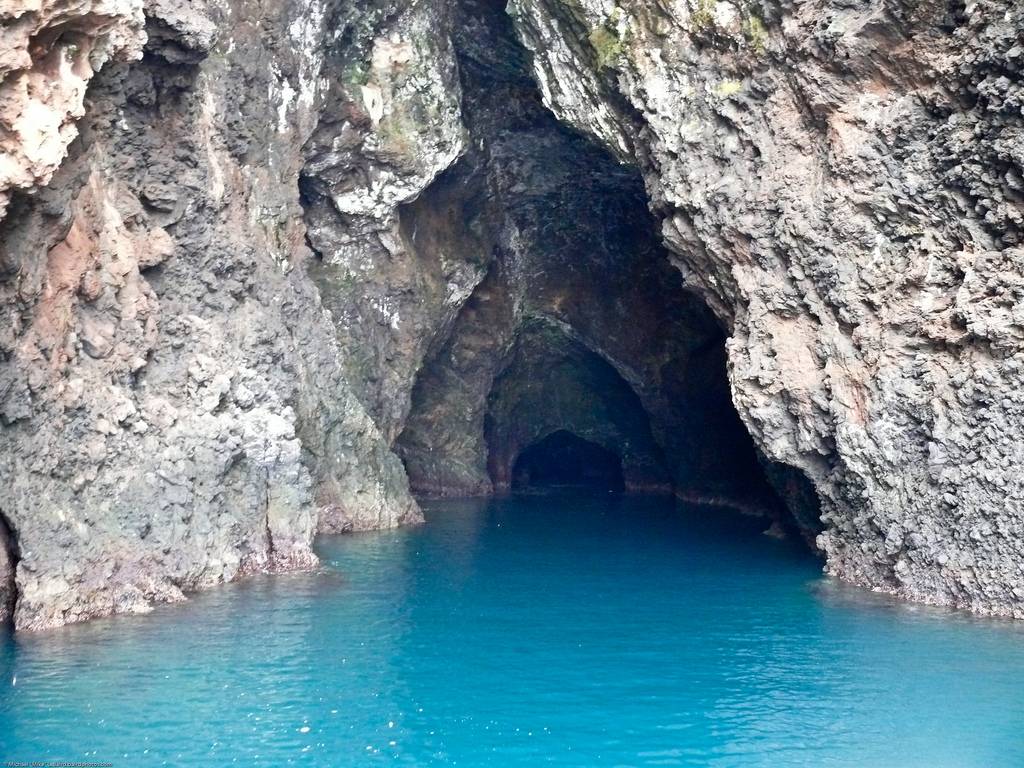 Before there was Santa Barbara, there was Chumash land. Legendary purveyors of land and sea, the Chumash Indians spanned the Santa Barbara coastline and nearby Channel Islands long before the Spanish arrived. Their seashell currency and plank canoes can be revered at the city’s Natural History Museum, or just ask the ghosts of Chumash past a few questions on your own at the Painted Cave off Highway 154. 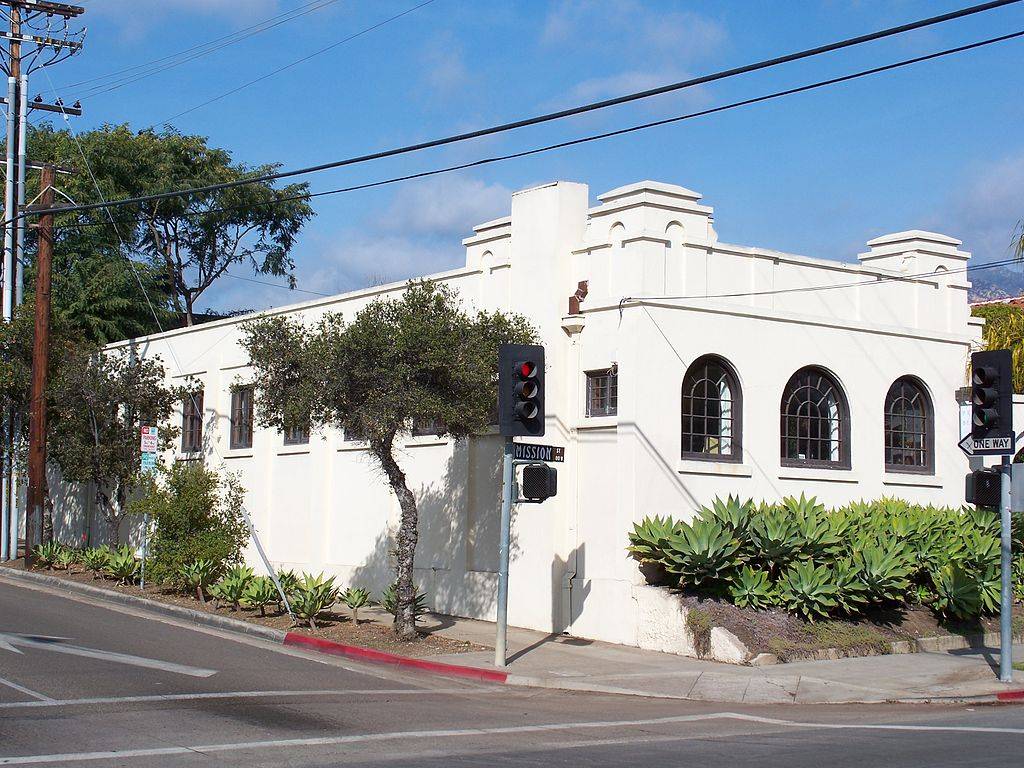 Eternally picture-perfect, Santa Barbara knew stardom before Hollywood existed. Beginning in 1910 with California’s first major movie studio, Flying A Studios, the city used to be the area’s largest producer of silent films. Too cool for fame, Santa Barbara soon passed the smog and paparazzi on to Los Angeles. 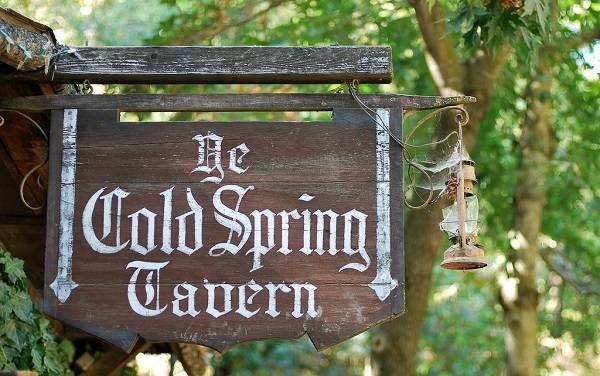 Built by Chinese laborers in the 1860s for travelers crossing the San Marcos Pass, The Cold Spring Tavern is proof that one century’s stagecoach rest stop is another’s romantic getaway. Perfectly preserved old school charm makes an attractive backdrop for the tavern’s timeless tri-tip sandwiches, only available on weekends. 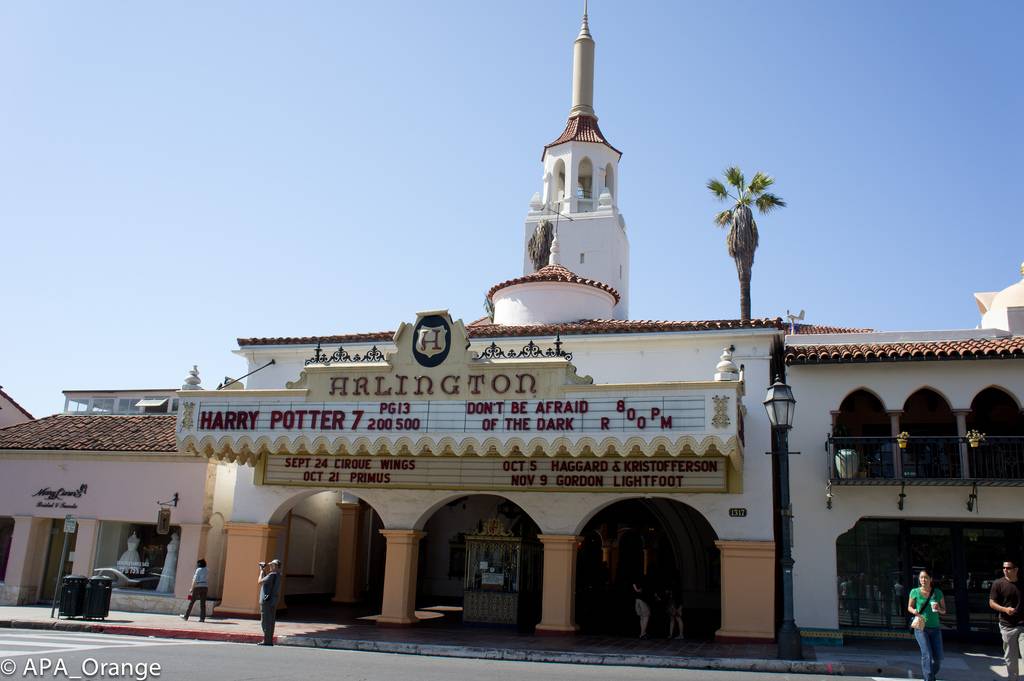 The historic Arlington Theater features a starry ceiling above mock-balconies, staircases and houses, giving guests the sensation of sitting outdoors in a colonial Spanish plaza. Home to the Santa Barbara International Film Festival, the Arlington is the best venue to view both fake stars and real ones. 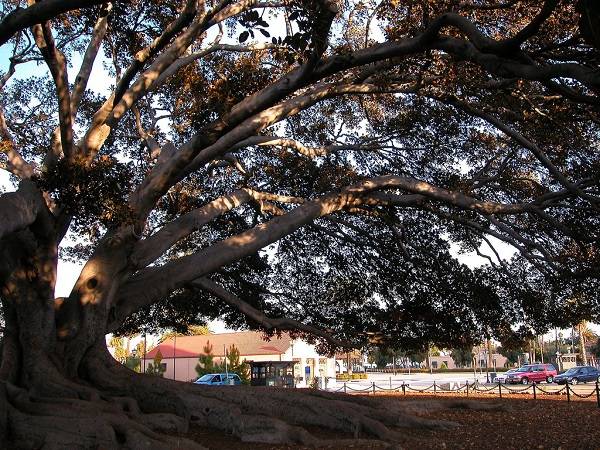 Spreading out over 160 feet, The Moreton Bay Fig Tree generates more than 21,000 square feet of shade. The largest of its kind in the nation, there’s no better place to curl up with a book and recover from yesterday’s sunburn.

27. Our Horizon Has Been Defeated 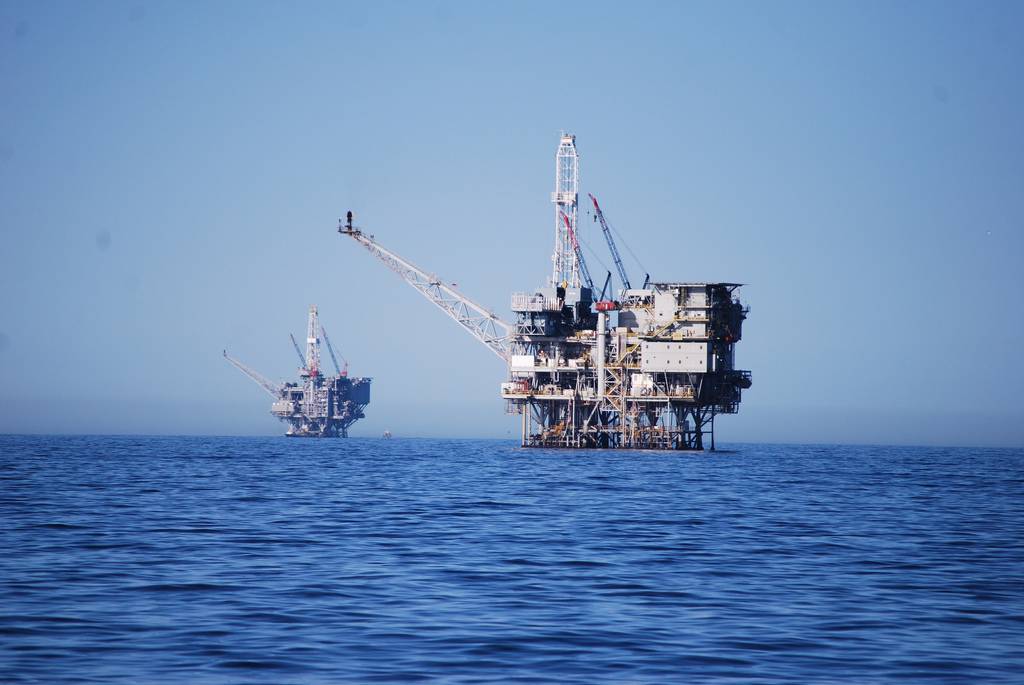 Jack Johnson’s pirates of the new age are actually oil rigs, the same ones responsible for the 1969 Santa Barbara Oil Spill. Sure, it was California’s largest ever oil spill, causing massive amounts of ecological damage, and during the daytime these offshore drilling sites do put kind of a damper on the otherwise flawless ocean view. But at night, they’re just like extravagant, blinking Christmas displays. 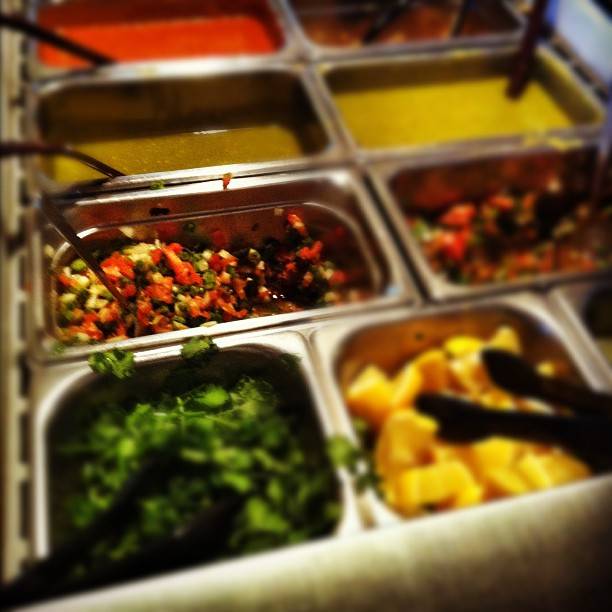 You’ll have to choose a victor yourself between the Los Agaves and Los Arroyos restaurant rivalry. The similarities are there: Both have a salsa bar, quick, friendly service and melt-in-your-mouth Mexican. You can try to stay objective, but let’s be honest—no one likes a two-timer.

29. The High Price of Beauty 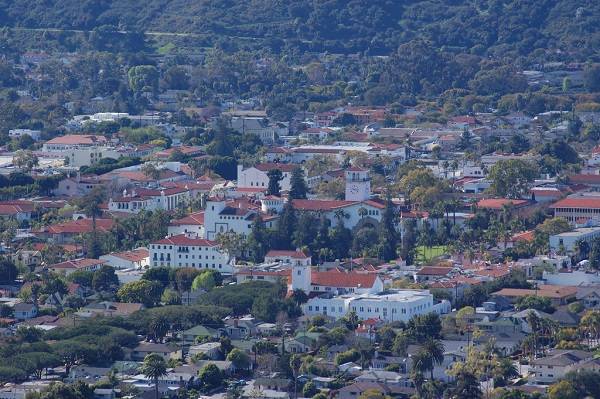 It’s as expensive as it is beautiful, and Santa Barbara is really, really beautiful. We’re talking postcard beautiful. In 2013 the average price of a single family home was more than $1 million. But, as with most things, you get what you pay for.

About Hazelwood Moving and Storage – Customers refer to Hazelwood Allied Moving and Storage as one of the most professional self-storage and moving companies Santa Barbara has to offer. Santa Barbara businesses and home owners rely on the full-service relocation company to handle everything from family heirlooms to rugged business equipment. Since 1918, Hazelwood Allied nationwide movers have maintained a commitment to quality and customer service. When using these quality movers, Santa Barbara customers can sit back and let Hazelwood carry the load. Visit the website and Facebook page or call 800-541-5958 for more information or to schedule a complimentary move analysis.